I'm struggling with anticipation on two levels.  Both feel very big and both are taking up my thoughts.

It may be that you anticipate the death of someone you love, it may be you anticipate bad news to do with your health.  Or something good, like tea with the Queen, or the birth of a new baby.  Or that your mortgage gets paid off this week after your boss realises you need that pay rise backdated to 1985.

Here is what is on my mind.

The One Woman Show

I am writing, with the help of a dear friend Tasha Yarker, and performing the A Graceful Dying One Woman Show and at the time of deciding to do it, thought it seemed an excellent idea.  It is an excellent idea.  There is much to say about the subject!  I am inspired and moved, I am amused and challenged by the experiences I have had with people as they do their dying.  I have seen much to make me think about how I live, and about how I die, and about what it's all about, this business of being alive and facing the ending of all things at some point.  There will be stories, thoughts, images and film from the people I have met and travelled with on this end of life journey, and I will challenge and reassure you in equal measure. I am excited, delighted and looking forward to doing this, and am sure it will be all that I hope for.

Here is some information on the show for you -

Antonia Rolls, Artist Extraordinaire and soul midwife, doesn’t know how to die.
A Graceful Dying is about one woman’s quest in middle age to prepare for her own death, may that be far in the future, by working with, observing and questioning people who are actually doing it.  For the last seven years as part of her work as an artist and a soul midwife, Antonia has interviewed and painted portraits of people as they have done their dying.  A Graceful Dying One Woman Show is about preparing for the end of life by asking the dying themselves how they are doing it.

Frank, unsentimental, sometimes amusing, Antonia introduces stories and images of people who have shared their dying.  Powerfully moving and uplifting, the show shines light on how we choose to live.  To suggest we wake up and take notice of what life we have.

To book tickets for the A Graceful Dying One Woman Show, a direct link to Sweet Venues can be found below -

Simply scroll down to the A Graceful Death show title, click on it, and your address bar will show the link that goes directly to it

My youngest brother Fr Dominic Rolls went at last into the hospice yesterday afternoon. About a year ago, he left his parish in Dorking to move to Edinburgh where he would rest and concentrate on managing his cancer.  I think he both believed he may recover and also that he may not recover, and so just in case, he chose the hospice up there to move to at some point in the future when he may need to.

Though there was always the slight hope that his cancer would continue to be contained, there was also a growing acceptance that it would not.  And that perhaps the hospice was really going to be the place he would end up in.  That growing acceptance was strangely subtle; it was always about his going there, yes, but always too about some time later, in the future.  It felt as if it was never quite going to be now.

Yesterday, I had news that Dominic, who has been deteriorating rapidly in his beautiful rooms that he had created in Edinburgh to give his mind and body and soul comfort, his rooms with their high ceilings and walls painted the most exquisite shade of blue, with their sash windows letting in so much light and the framed photographs of each member of his family and the antique carved wooden bed that he inherited from his grandfather, yesterday Dominic finally asked to leave those rooms and go to the hospice from where he would end his days.  It was very hard for all those around him.

Edinburgh is a long way from Bognor Regis.  It is a long way from London, from Brighton and from all of us, his siblings and his family.  But we are finding our way, each of us, to the hospice this week, to somehow say goodbye to Dominic, who we cannot believe is really leaving us.  I am travelling up tomorrow to stay there until the end.  This is going to be a tough one.  This death will be so much more about loss and things not being in the right order than usual, probably because this death is so personal.  I remember Dominic being born, I was three at the time, and I will be there when he dies.  I will be fifty five.  That's ridiculous.  How will I make sense of this?

Dominic is at peace with himself and has made his journey with his eyes and his heart open.  He has struggled and has been in distress, he has fought with the panic and the pain of leaving this world and he has also found great solace, great peace and great calm.  As a Catholic priest, he has had to work hard at acceptance and to give his will over to his God in this matter of his dying and death.  He is a priest, but first and foremost, he is a man, a person just like the rest of us.  His faith has not meant that he is spared any of the trials and pains of facing his death, but it has given him, in the end, great comfort and peace.  It has shown him how to be strong and how to be honest with himself.  He has shown us great humanity with this struggle to give up his life.  And now he is ready now to move away from us and when I see him tomorrow, I hope he will be aware of me and know me, but I don't bank on it.

These two things are linked.  When I was staying with Dominic in Edinburgh a few weeks ago, I talked over the A Graceful Dying One Woman Show with him.  "Yes," he said, "I think that it is important that you speak from the heart.  Be very honest, and tell the truth.  These are your experiences and the part where you don't know how to die is the most important of all."  And so, that is the nub of the show.

I will be working on the One Woman Show and sitting with my youngest brother as he does his dying at the same time.  When I come to do the show, when I open on 30 May, I will still not know how to die, but I will have had another excellent, wonderful teacher that showed me with grace and kindness, how he did his.

I anticipate my journey up to stay with Dom tomorrow with joy and much sad confusion.  I don't know what to expect and I will just have to see what to do when I get there.

I anticipate my opening afternoon (the show starts at 4.30pm) in May and all the performances I give, with butterflies in my stomach, a nervousness that is hard to describe.  The last gift Dom gave me was the gift of his insight and belief in what I do, and his contributions to the A Graceful Dying make me feel that perhaps, despite all the things he has to do after he dies and goes to heaven, perhaps he will be with me too, making sure I am true to myself and I don't make anything up on the night.


Below, Dom just after Mum's funeral last September 2015 and then a year earlier working with me for the A Graceful Death exhibition.  We had just done our interview and I was leaving him exhausted, to go and write up all my notes. 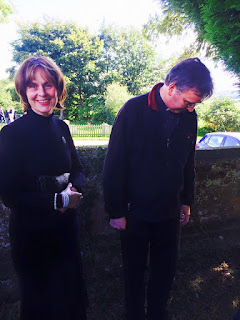 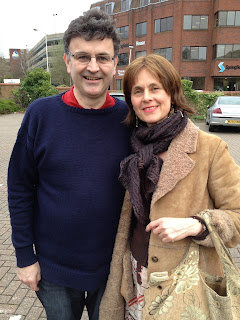 And here is the portrait finished last year.  Dom is jolly and looks well, but holds a ball of toxic chemo drugs that he had to carry around with him.  It is attached by a tube intravenously into his heart.  So if you look carefully, he is not well.  The whites of his eyes are yellow too.  There are clues when you know what to look for, that all is not well.  His halo is the prayer that he says to himself to give himself courage.

"Take Lord, receive all my liberty, my memory, will and understanding.  Give me only your love and your grace and that is enough for me" 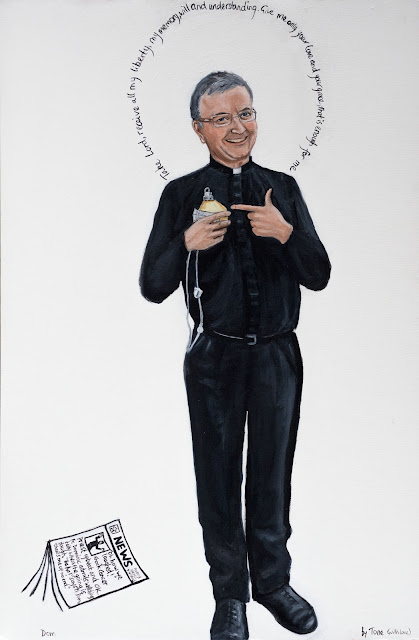 to read Dom's interview to to http://agracefuldeath.blogspot.co.uk/

Come to the A Graceful Dying One Woman Show.  Dom, I hope, will be there in spirit.
Posted by Antonia Rolls Artist and Soul Midwife at 06:32 No comments: