Sometimes I doubt myself.  I think, it isn't really that bad.  Sometimes, it isn't that bad, I am right.  Other times it is scary, unpredictable and I don't want to deal with it.

What am I talking about?  I used to say it is just dealing with someone who is high as a kite, incoherent with medications, aggressive, unreasonable and needy with alcohol but now, I am thinking again.  Yes, I feel all that anxiety and yes all those things I described are hard to deal with but I am thinking it isn't really the substances though they make things much more irrational.  It is the mental health that is behind it all.  It is the emotional, mental, spiritual pain that drives the need to self medicate in the first place.

I used to think, with an addict, treat the addiction and everything will slot into place.  For a long time, I believed that the big thing with drugs and alcohol is to remove the addiction bit, because that is the worst manifestation of wrongness a person can have.  When it is gone, dealt with, sorted, then life will be better.  In many ways that is true, the actual addiction thing is fantastically awful to deal with, live with, have.  But the more I look into addiction and addicts for my upcoming exhibition Addicts and Those Who Love Them, the more I realise I know nothing.  It is as complex a matter as the stars in the sky.  Someone suffering from addiction often has chronic social, emotional, mental and spiritual needs that are unmet, unaddressed and overwhelming. Becoming clean and sober is a first step but then the hard work begins.  How do they live in this world that seems hostile, flat, hopeless and unkind without something to take them away from it all? They need and seek escape. Who are they in this world, and how can they cope with life, especially if life is so very hard and painful? As yet, I have not met anyone who either just took one dose of something and become hooked, or who had the best life ever and decided to give it all up for drugs and alcohol.  The people who do give their best lives ever up for drugs and alcohol are possibly not actually having their best lives.  Maybe it looks that way, maybe it is supposed to look perfect, but really isn't.

I am wondering whether, in some circumstances, being stoned or high or drunk is a better option for addicts.  A nicer place for them to be.  Less connection to the awful realities in real life though not good for everyone else to deal with.  I watched someone recently become so high on whatever they took it was impossible to do the things outside their home that they said they wanted to.   It was really annoying but that is because I can come and go without a moment's thought.  This person was so afraid of life, so addled with self doubt and bad choices, so mentally unwell and so sure they would suffer outside the home, that they became incapable of leaving. The drugs successfully covered the distress of dealing with life.

The people in my exhibition on addiction all teach me deeply personal and important things.  I don't take drugs (except tea, which funnily enough is a drug) and I don't drink alcohol, I do not know anything about that world except for what I am told and observe.  It seems that behind all the addiction behaviour is depression, isolation, distress, shame, abuse, trauma, confusion and self hatred.  Lack of connection to others. No wonder they all take and took drugs and alcohol.  No wonder.  And as I have said before about all this, I have no idea what to do about it.  That is why I am creating this exhibition.

I am learning that there is a difference between drug dependency and drug addiction.  I am learning that only about 10% of people become addicted, which leaves about 90% who don't.  I am learning that the messaging about many drugs harms is hugely exaggerated, and that the worst performer on the drugs harm scale for harm to oneself and to others, by a long shot, is alcohol.  I am discovering just how many people take illegal drugs because they like it and do not go mad.  Drugs work.  If you want to heighten your experiences, they work.  I thought one sniff of heroin would get you addicted.  I thought all drug takers were addicts.  I thought addicts could get better through rehab, and then I thought they couldn't.  I also see that all addicts are people, and all of them were someone's little child once whether that was a good experience for them or not.  I also learned that drug taking does not necessarily create brain damage.  And most important of all, I am now convinced that the war on drugs is one of the biggest failures of all time.  Drugs laws are not working and I never thought I would think this, but I do.  Big time. With knobs on.

All of the above is why I sometimes doubt myself.  I do not know much about being addicted. I thought I did, but I don't. The addict in my life may not be an addict after all, as they have always told me, which I poo pooed.  Of course you are! I thought. I am dependent, this person said, and that is different.  I am beginning to see that it is different, and dependency is serious stuff too. I am less afraid of drug taking now.  There is so much behind it, so much I don't know yet, and asking questions of people for my exhibition has brought the person, the people, behind addiction, to the front.  It is making me see addiction in my own life differently. That has to be a good thing. 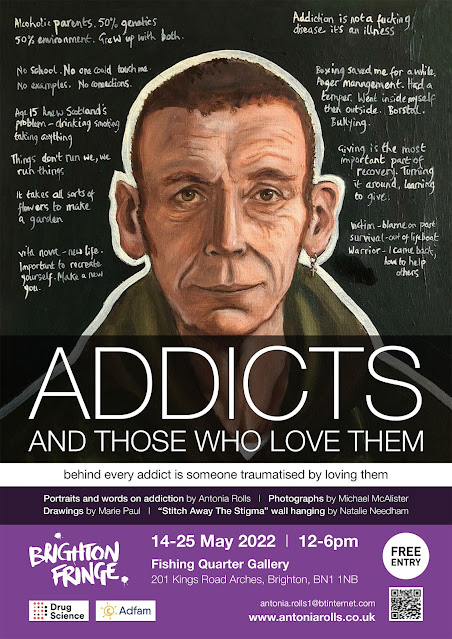 Support this work on my Just giving crowd funding page

And on my Patreon page here

Posted by Antonia Rolls Artist and Soul Midwife at 11:31