At the end of the day, Love Handles! And an interview about Motor Neuron Disease.

Today, Fancy Daughter and her boyfriend, began a two day extravaganza of odd jobs in my house.  I gave Fancy Daughter my debit card and a list of things to be done, and told her that she could choose the colour of the bathroom as I hadn't time to think.  Mend the lock and handles on my studio too, I ordered them, and you decide what kind of lock.  Fancy Daughter put on her lipstick, dusted the Boyfriend down, and went off to B&Q with a glint in her eye, to decide what was best for me.

"Go", I said to them both, "and do your thing.  Today I am deeply busy and cannot be distracted, not even for a moment."

Eileen Rafferty, photographer extraordinaire and dear friend, is staying this weekend so that she and I can film a conversation with Julia and her family, in their house in Dorset, for the A Graceful Death exhibition and project.  We arranged to go today, despite it being very hard for Eileen to get away from London, because Julia is deteriorating fast and speech is becoming more and more difficult for her.  Julia has Motor Neuron Disease.

I have just finished a painting of Julia, and in the time that it took to do the painting, Julia's health has declined steadily.  Julia has still much to say, and has the support of her wonderful husband, Barry.  Both agreed to be filmed talking, and to show us what it is like to have, and be in the presence of, someone with MND.  Eileen filmed about one and a half hours of the most profound and moving conversations, revelations, laughter and tears.  We were joined by Julia and Barry's twelve year old daughter Elizabeth, who has found the process of her mother's rapid decline both frightening and unbearable.  She has not been able to talk to her mother, not knowing how to, and finding Julia's decreasing ability to speak and move, confusing.  I think Elizabeth has found it easier to keep away from her mother, and to keep her feelings to herself. Despite having much support from her school, Elizabeth has been deeply troubled and has felt isolated and alone. Julia has watched this and has been unable to instigate anything, and as a mother, has longed to talk to her daughter and tell her that nothing that Elizabeth says to her, is too much for her.  Elizabeth, as she spoke, revealed that she did not want to upset her mother by telling her how she felt.  She felt that she had to be strong for her mother.  I think too, that Elizabeth, understandably, does not know herself, how she feels.  She does not like to see her mother's decline.  It is difficult, said Elizabeth, to get up in the mornings.  She does not want to see more evidence of the MND by the time she returns from school.  It frightens her, and she does not understand the way the disease is changing her mother, her family, her life and causing everything that was safe, to become unsafe.

Julia may not be able to speak clearly any more.  She may take a long time to say a few words, but she is still a mother, a loving and devoted mother, and a mother who watches and understands her children, even as her body is no longer working for her.  I was moved by Julia's love and understanding today of the fear and loneliness of her daughter.  There were many, many heart rending tears, and many frustrating attempts to make herself understood.  And I was so touched by the simplicity of the need for Julia to have her daughter come to her and talk, and by Elizabeth's pain and fear of her mother's illness taking her away from her.  And too, by Elizabeth's obvious love of, and pain at, loosing her mother.

Julia's husband Barry is patient and kind, supporting Julia and listening to Elizabeth.  Barry works hard to support the whole family, they have an older son too, and Barry does his best, and more, to understand, look after, and be there for all of them.  But it takes its toll on him too.  He appreciates and needs the help of the many professionals who come daily to help with Julia's needs, but he feels that his family is somehow slightly out of control and no longer private.  It is hard, despite the gratitude he feels for the help and advice that they receive, it is hard to see his wife so helpless and needing round the clock nursing from so many different people, some of whom are total strangers. The conversations that we filmed today will show how much time we need to give to those with Motor Neuron Disease, and their families, how it is essential to take the time to communicate.  I watched Julia, clever, intelligent, wise Julia, point out letters with her eyes in order to spell out a word when she could not get her mouth and throat to say it, to tell her daughter that she understood how frightened she was.

Here are some of the things that Julia says to remember with someone who has Motor Neuron Disease
Eileen filmed the conversations with her usual delicacy and discretion.  I prepare questions in advance for these interviews, but rarely have to ask them.  Today, the family were incredibly honest, articulate and brave,  talking about the way that they are living with, dealing and not dealing with, Motor Neuron Disease.  It is an absolute lesson to me, who knows nothing about how to live with a terminal illness, of the reality of life, death  doing the best you can with what you have.  It is difficult to say what I learned from being with this family today.  I was shown something far bigger than me. This is a normal family, an every day family, dealing with dignity and grace, sadness and patience, with something not normal at all.  They are dealing with the steady, visible, unstoppable terminal decline of Julia, mother, wife and much loved lady.

I have asked Elizabeth if she wants to include her drawings in the A Graceful Death exhibition.  I have not seen them, but she says that drawing helps her to get through difficulties.  I hope she does, her drawings will be very valuable and very good for children who are going through the same thing.

And so.  After two hours of filming, Eileen and I left to go home.  Everyone was exhausted.  Eileen will edit the film and it will be made into smaller films, maybe more than one, and put up on our A Graceful Death channel on YouTube - http://www.youtube.com/user/AGDChannel.

Meanwhile, back at home Fancy Girl and the Boyfriend were tackling all my odd jobs and bits and pieces around the house.  Remember the request from me to put a new lock on the studio door?  And new handles? 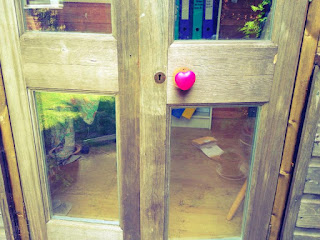 I got, it seems, love handles.

And the bathroom is painted hot turquoise.

And they stopped during the hot afternoon to set up a large barbecue, which took them far longer than they had anticipated.  There was so much to eat that it cut into the time spent doing the bathroom but hey!  That's OK because they washed up!  I thanked them, and searched in vain for any of the left over food from the barbecue.  "None left!" they said gaily, "except for a lettuce leaf which you and Eileen can share between you."   I thanked them again, and putting the lettuce leaf into the bin with a merry little hum, put the kettle on and got out the chocolate.

Posted by Antonia Rolls Artist and Soul Midwife at 16:05