Are We Ready to Talk About Dying?

An article written by Katriona Feinstein from the AGD talk and exhibition at the Brighton School of Medical Science. 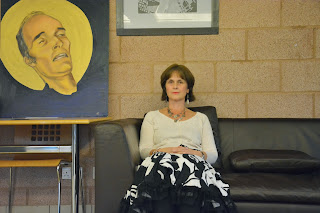 Bognor Regis artist Antonia Rolls opens up the conversation on death – and the result is surprisingly positive
I am sitting in a brightly-lit lecture hall in Brighton and Sussex Medical School, watching a woman use a green LED torch light to show areas of interest on a picture of a dead man.  She draws our attention first to his still-moist lips and then to the bright spots on his jaundiced, sunken eyes.
This is no medical demonstration.  Our speaker is no woman of science.  She is Antonia Rolls (left), full-of-life, self-professed Artist Extraordinaire.  The picture is in fact a painting – hers – and in it she has depicted her beloved partner’s emaciated face minutes after his death, framed by a golden halo.
I was not sure what to expect.  Like many, I am used to thinking of death as something we all know is there, waiting in the wings, and that, probably, the best thing we can do is just to keep it quiet.  Like an uncomfortable shared secret we know we’ll all be forced to listen to, loudly, at some point or another.  Why not put it off until then?
Antonia is on a mission to show us this attitude is not helping.

It all started for her in 2007, when her partner, Steve, was dying from liver cancer.  Bewildered and angry, she did what she knew best and painted the last few weeks, days and the actual day of his death, “with no other aim than to survive and understand this terrible loss.”  She never expected anything to come of these painfully honest depictions.  “I didn’t think anyone would want anything to do with me if they saw them,” she said with typical wry humour as she showed us the first image of Steve’s deteriorated form.

But in 2009, she summoned the courage to put on a small exhibition of the works in her house.  To her surprise, strangers and friends turned up and responded passionately to her illustrations of the end of life.  Most importantly, she found amongst her visitors a common desire to talk about their own experiences.  “I learned a huge lesson that day,” she said.  “Everybody has a story to tell.”

And now, Antonia tours the country telling the stories that people want told.   Since those early days, A Graceful Death has grown to include commissioned paintings of both dying and dead subjects, in addition to “Survivors” – those bereaved, or those who have endured a life-threatening illness.  At her exhibitions and talks she tells each person’s story in charming and poignant detail, helped by poetry and snapshots of that person’s life and death, written by their loved ones.

Her aim is to start a conversation about death and create a space where people can share their feelings on this often-avoided subject.

“I don’t want to die!” she admitted readily during her talk.  “It’s the biggest unknown.”   But it is as much a part of everyone’s life as all the rest, she said, and accepting death is fundamental to having an easy one.
In East Asia, Confucian philosophy helps death to be thought of as an inevitable part of Destiny.  A man’s death can be considered less final through a belief that his family will constitute a continuation of his self.  However, as Antonia pointed out, in our more individualistic western cultures, we do not have a tradition of acceptance and we tend to fear the topic.  She believes we all have to deal with death at some point and most of us, through dodging thinking about it for years, suddenly have to go through a “crash course” on how to cope whilst at our least able to do so.  She wants to use A Graceful Death to show that it is not wrong to talk about death, to cry, to get upset and to laugh.  “There’s a lot of laughter in the exhibition,” she said, with a smile.

The wit and candour with which she discussed her own gruelling experiences illuminate each of her paintings.  Her simple diptych, ‘Alone with Tea’ (left), portrays herself, desolate after her partner Steve’s death but with a teapot and mug by her feet.  She writes in the paintings’ description that here she is taking solace in the fact that “there is still tea.” 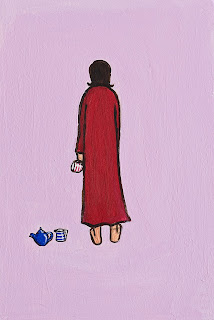 Then there is the story of Hiram Burnett (right), a real character, strongly disliked by all of his children.  On what was to be his final day alive, Hiram’s daughter Cecil decided to visit him in hospital after a long time apart.  There Cecil finally realised that although she did not like her father, she loved him totally.  She asked him if she could take a photo and he instantly pulled the cheeky face seen here in Antonia’s painting. 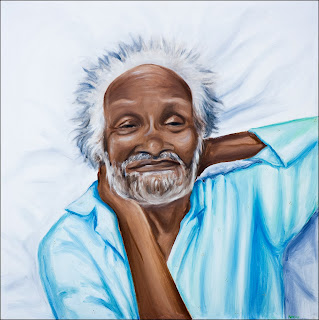 Walking around the cold and fluorescent lobby of the Medical School, I could not help but be touched by these stories.  Each person (or cat!) was given his or her own small, personalised section.  Antonia’s great skill was to give each life a sense of truth and immediacy, through boldly-painted facial expressions and intimate accounts from families.  The cherished slippers, rubber ducks and tiny perfume bottles hiding cosily in each painting were symbols of each of these subjects’ rich, various and funny existences.   I found an inescapable feeling of brief closeness to each one. 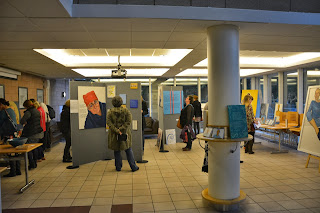 And yet death as a topic can still seem too raw to seek out.  I was told that some who had booked to come to the exhibition could not face entering the building.  It is certainly true that a few of the paintings are uncomfortable and haunting.  One in particular shows Steve in the bath with rubber ducks.  She writes that here the illness had taken hold of him and he had slipped into another place mentally where she could not reach him.  He looks frail, uncertain and lost.

I asked Antonia why people want to be represented in their dying states.  Would their families not want a painting that reminds them of the good times?  Are there not photos from their youth that could be painted?
In spite of what society expects, “dying people do not want to go and die quietly in a room somewhere,” she replied.  “Until they are dead they are very much alive and they each have a story to tell.”  Many of them want to be seen, she said, and this is why they or their loved ones have approached her to ask for paintings from the last stage of life.  I was surprised to learn from conversations with audience members later that it is also not uncommon to take photographs at funerals, in order to chart the very last part of a loved one’s story.  They saw it as part of the acceptance of death.

And what does Antonia get out of doing this work?  “Painting someone who is dying and disappearing before your eyes helps to keep a connection with them even though they are changing and moving off to another place.”  After this helped her through Steve’s death, she said it “seemed right somehow” to move on to painting others.  “It is the most humbling and inspiring, and sometimes very difficult, way to paint…  It has changed my life because now I try to understand what I have, not what I have not.”
Although the subject matter may seem the heaviest, the hardest to understand and the most frightening, Antonia’s talk on her work for A Graceful Death and as a “Soul Midwife” (a spiritual and emotional companion for the dying) was in fact uplifting and cathartic. 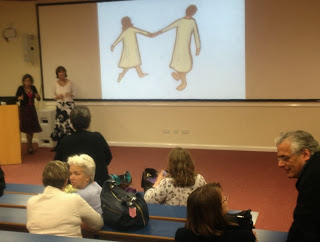 The audience watched in sharp silence as Antonia interviewed Mike Hardy, an ex-headmaster severely disabled by Motor Neuron Disease, and Michelle, his wife.  Mike was supposed to attend the evening but after 11 years of living with the disease, he had recently become unable to travel and was forced to appear by pre-recorded video.  “He never gets any better,” his wife said during the taped interview, “only ever worse.”

Despite such bleak content, the video and talk actually united the audience – which was an eclectic mix of medical students, doctors, mourners, clergymen and art enthusiasts.  The evening was not academic or particularly philosophical (apart from encouraging openness).   It was an appreciation and discussion of a spiritual experience that never became over-sentimentalised or centred on religion.  Its focus was our entirely human reactions to death and our shared ability for resilience.  In the context, it became life-affirming to watch Mike and Michelle chat on film about carrying on with their lives as normally as possible and Mike continue to tease Michelle through his computer-operated voice, as he always had done when able-bodied.
After the talk, most audience members turned to their neighbours and asked them questions or comforted them if they seemed upset.  One woman talked to me about her brother who had died young and I, usually reticent on such matters, found myself telling her about the song they had played at my grandfather’s funeral.
I would highly recommend A Graceful Death as an unusual and unexpectedly uplifting experience.

Posted by Antonia Rolls Artist and Soul Midwife at 03:06