Seeking our father inside his Alzheimer's, part two

It is very hard to watch our father shouting, though he is comforted and cared for constantly.  He is struggling with progressive Alzheimer's disease, his once fine mind is shutting down and he knows there is a great darkness where once there was poetry, music and conversation.  Where once he was reserved, private and amusing, there is now an unstoppable outpouring of confusion and distress.  Help me, he calls, and my brothers and I hold his hands and watch.

It sounds as if he is in great pain, but we are assured that he is not.  I took him in his wheelchair out into the bright February sunshine, his knees and shoulders covered in blankets.  He will like the feel of the cool air, and the brightness of the sun, I thought.  He will know he is outside and he will like it.  But he did not like it.  The bleakness in his brain came with him, and he was unsettled by the change in temperature and surroundings.  I took him back inside, trying to wheel him carefully over the grass, hoping the tiny bumps in the ground that I would have given no thought to, would not jolt him and cause him to call out in fear.  Once inside, I took him to a large sitting room, and sat him by the window to feel the sun on his knees.  We sat together and I tried to distract him from his shouting, but he couldn't understand my questions, and didn't remember what I was describing when I spoke of our childhood with him as a wonderful father, and he shouted his responses in between calling for help. In desperation I sang him a song he loves from his own childhood, though I couldn't remember the words, and muddled my way through it.  It did calm him, and so we sang it over and over until it was time for me to go.  And now I have gone, I thought, he will shout again, and what on earth was the point of my visit?  I left feeling tearful that this most gentle and educated of men, this kind and independent father of ours, would have already forgotten how I had sat with him and found a way to calm him just for a moment.  For me, it was a big thing.  For him, it seems, it never happened.

And yet he is in there.  I keep asking him to look at me.  He always does, and I know he can see me for that moment.  He knows who I am.  Tone!  he says when I say hello Dad, it's me. Tone!  Where have you been?  His delight is real, and if I say I have been here all along Dad, I just popped out to the loo, he will believe me.  I don't say that, but it doesn't matter anyway, because I will be forgotten and so will my visit, as soon as I leave his side.
Today when I went to see him, he was not shouting.  He seems to have stopped.  He is peaceful and calm and sleepy.  My brother John said, his face has sunk into itself.  It's true, his face has lost its old definition, and yet he is still handsome.  His face does not care about how it looks anymore, it is only responding to the shutting down of his mind.  He cannot control it, he has no awareness of it, and it shows how weak and tired and old he is.  In a strange way he is like a baby that has no idea of who it is; a very old, white haired, gentle sleeping baby. 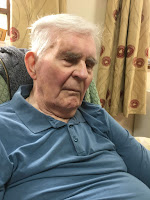 I want to ask him something about what is happening to him.  I want to ask what it is like to be so old and with Alzheimer's.  I want to get through to the eccentric, clever, witty and philosophical man that still lives inside his brain somewhere.  What are you thinking, Dad?  I ask him, and he seems to pause, as if he knows I am asking him an important question.  His mouth moves and I can see he could once have said something profound in response, but his brain has shut down a way of making any sense of the question.  But he knows, he knows we once would have talked like this.  Instead now, he closes his eyes and his head droops onto his chest, and he disappears back to that place that I cannot understand and in which I cannot find him.

There is not much time left to make him understand we love him.  He may go on physically for ages, but the sparks of light in his mind will soon remove him from us completely.  I love you, Dad, I say, and he smiles.  I hope that lodges in all his brain cells, and cannot be dislodged.


I asked my brother Ralph to write something of his feelings for this journey of Alzheimer's and endings and our father.  Here is what he wrote - 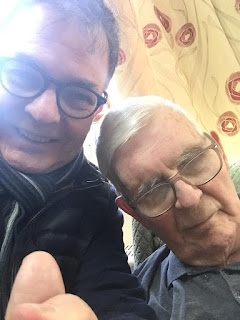 My father has Alzheimer’s.  Apparently there are seven stages. He’s had it for quite a few years now and for so long there was no impairment whatsoever. It was a phoney war.  There were minor memory problems that I put down to old age and the result of TIAs some thirteen years ago.  The decline was gradual and punctuated by odd periods of trauma resulting from the loss of loved ones. Three years ago I got married and my father sat at the top table resplendent in his morning coat and making mildly caustic remarks about the speeches. In those days he looked after himself in his smart riverside flat. Each day he did the Times crossword and assiduously read the TV schedule marking off programmes he might like to watch that day. He was part of the pre surfing generation who sat down to watch specific programmes and turned the TV off when they were over. His life was ordered: he shaved every day; he ate all his meals at the dining table at the same time each day; he went to church on Sundays etc. he drank too much but never got drunk. He justified it by saying he was healthy- “I walk to the shops every day.”  Alcohol was ubiquitous. A glass of beer with his lunch; a couple!!! of gins and tonic at 6pm; a bottle of good wine with his evening meal.  “Once a bottle is opened it will become oxidised and so MUST be consumed that evening.”  Cumulatively it had an effect.  His blood pressure grew and in the autumn of 2006 he crashed his car whilst having a series of  TIAs.

Even then the justification for drinking continued. He would argue that experts believed that light-to-moderate consumption of any form of alcohol — not just red wine — could reduce risk for stroke. One to two alcoholic drinks per day may increase the amount of HDL, or good cholesterol, in the bloodstream. Alcohol also may serve as a blood thinner, helping break up blood clots. And then the memory started to go: the repetition of questions; the misplacement of keys and money; the disorientation and the getting lost in public. I began to notice that in family or social activities he would sit quietly and speak only when he was spoken to. This was a man who before would charmingly interview people when he spoke to them. He was a consummate conversationalist. Now he was withdrawing from social activities. However he was still jolly and gentlemanly. I once remember him reading the epistle at church. God only knows what he read; it was certainly not the reading on the lectern.

And now when I go to the care home and walk down the corridor to the day lounge where so many sit, I dread it. Only a year ago he mischievously called it the ‘dribble lounge’ and asked to be spared sitting in it. And now there he is, inert, head lolling indolently; dribbling.  He is permanently confused; he is seemingly lost; he has all but left his body.  All conversation has gone. Recognition is sometimes by sight but more often by hearing my voice. I hold his hand and either read him poetry of play tunes on my mobile phone, from his childhood. He will nod; sometimes beat in time to the music; occasionally smile. He relaxes and for a while we connect silently. I miss him dreadfully.

Posted by Antonia Rolls Artist and Soul Midwife at 12:26