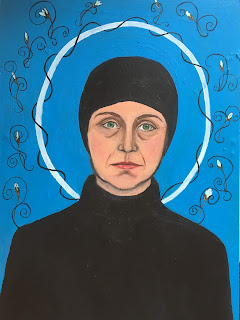 I pretend I have a Buddhist type mind.  I think it is evident if I present as calm and unruffled by life.  All that I have read about Buddhism makes perfect sense, and I tend to agree with it by feeling satisfied that actually, I already do that.  Whatever deep and meaningful books I read, I find myself thinking, well, lucky for me that I don't have to do any of that. I do it already.  I am actually, I think, a bit fab.  I like how advanced I am, I am lucky to be so wise and calm and perceptive.  I am lucky to be able to understand the energy follows thought kind of thing.  It is a very nice place to be.

What is more accurate is that I have a whirligig mind, wrapped up in some comforting distractions that I have lifted from very worthy and good books, and used to prevent myself from noticing I am not really that advanced nor Buddhist.  It takes a while to create the belief that one is safe in one's mind, and that it is comfortable in there.  It is comfortable thinking the things we think, and knowing the things we know, and having our views sorted enough for us to not be too challenged.  It is entirely understandable, it is inevitable, that we should create our safe space in our minds, because we have to live with ourselves, and make sense of the world.  At the same time, we are called upon to cope with things that we can't quite understand like love, and violence, and news stories, and other people, and why if we know it isn't good for us, do we still bulk buy ice cream and pot noodles?

So I have created an illusion of a Buddhist mind.  For myself.  I can do my projects, write my articles, rush about like a whirligig, all the while believing I am not rushing about.  I have it sussed, I say.

The whirligig mind does the following. It is unable to say no to ideas, it is as excited about the idea it has just had as about the project already in hand, and going well.  It doesn't give one idea time to sink in and start to work before the next four pop up and are given exactly the same amount of attention, even if they are (possibly) really silly.  It thinks it can start things off, and watch them hurtle about like spinning tops, and that somehow it will all be fine.  A whirligig mind agrees to do things despite already doing things, as if time will somehow become elastic and stretch to accommodate the new plans, and nothing will suffer.  When eventually, a whirligig feels they are run ragged, they get despondent and a bit sad, and feel a failure.  All the spinning tops are off out there careering about, some doing well perhaps, but most losing speed and crashing into each other.  "Oh dear", says the whirligig mind, " I tried so hard, nothing is working, I am so useless", and their friends give them hugs and say, that, perhaps they are doing too much.

"Too much!" says the whirligig, "Nonsense! This is just the beginning!" Whirligigs do not listen.

But in their quiet moments, they think that perhaps they are doing too much, and because they lack discernment and boundaries, they have no idea what to stop and what to continue.  So they may get back out there and carry on with all their ideas despite feeling dispirited, or they may disown the lot of them.  That is when they really do bulk buy ice cream and pot noodles.  They need a treat.


What is to be done. A personal take.

It is unlikely that we whirligigs will slow down and take stock unless life gives us a shove.  I was given a knockout in late summer this year, after which I was required to look around me at my choices, and to unravel them.  The ambition I had for a particular project had blinkered me to the consequences, I was on a roll, it was all going to be fine.  I was in control! And I so wanted to do this project.  It was personal.

Of course I went ahead with the project.  Things were not going well, but the show must go on.  There was too much invested in it to stop and besides - what would people think? So we did it.  And far from being delighted with it, I was ashamed of the difficulties I had stirred up.  I don't think anyone knew, but I was shaken and challenged and found no peace.  When it was over, and everyone had gone home, I was left to think about what I had decided to do, and what I had allowed to happen. I was now required to look at what was real.

It was very hard.  My whirligig mind had nothing to distract it.  I was involved with so many different things, I had given my time and focus to whatever came my way and now I had no desire to do any of it.  I needed to think.  This Buddhist mind business was a bit of a sham, I began to see.  I was no calm, detached, wise and illusion free person, I was an over busy, over committed, superficial jack of all trades.  "Time to stop", said my friends, and for once, I listened.  Things had become so difficult, I was really out of my depth, and I wanted to think and be alone.  I cancelled everything and went to bed.

In my dressing gown, from the sofa, in the middle of the day a long while later, I began a time of reflection and understanding.  Over the weeks, this is what I came up with and bear in mind, this is just a few  -


So I have taken my metaphorical phone off the hook, and am having what I call a sabbatical until 2020.  I am seeing what plans I have that are authentic, and well thought through, and sticking with only one or two.  Maybe three.  Or four.  I could do ten ..... (and breathe).  And I am not doing anything now.  I am thinking about them and planning them only.


Getting good at sitting down.  I have little insights into what I want to do, and I have long ponderings about what I don't want to do.  I get excited about new plans now that I am a recovering whirligig and then I remember, plan only one (or two) things at a time and do them well.  Yesterday I had a brain wave.  I will do a new one woman show.  It will be easy.  Now that I have stopped all my previous projects I have more time.  I know, I thought, I will call my friend Deb and she will help and we can get this sorted by May and she can put it on in Southampton.  Then I remembered.  I already have a project to plan and think about (just the one) and I am not doing this kind of whirligig thing any more.  It was really hard to let it go but I managed with a packet of biscuits.  I was on my super comfy sofa, the fairy lights were lit and it was raining outside.  I began to think, do I really want to fuss about again, and chase spinning tops?  Mostly, no.  But a bit yes.

The two plans that I am allowed to have are -

To subscribe to my newsletter, with news of projects I am THINKING about go to my website and subscribe in the pop up box.  You will be glad you did.  So will I.  Thank you.

Posted by Antonia Rolls Artist and Soul Midwife at 13:00