I know.  I asked one of my son's friends if old ladies can have YouTube channels, and instead of being shocked that I called myself an old lady, he replied that anyone could have one.

I do already have a channel, with very little on it.  There is a smattering of stuff from a long time ago, and a five minute video I made of my mother as she was dying and of her actual death back in 2015.  Mother's video has gone mental and has had 427,521 views and 556 comments so far, and is growing daily.  I have 671 subscribers because of this one video and I am paralysed with fear because there is nothing else for anyone to watch, at all, and yet these kind people have subscribed to a one hit wonder channel.  They thought they were going to see great things, and they have not.  I want to apologise to them all for being a YouTube fake, and for not making anything else.  I look at my channel from time to time to feel awful about all the lovely new comments and views, with no idea how to follow up.  What on earth do I do after a video of mum dying?  I am, after all, just a grandma from Bognor Regis who does painting and stuff.

And then, I thought, that is the follow up!

I will take a deep breath, own my YouTube channel, and start a new online weekly posting from the studio.   That is, after all, where the A Graceful Death exhibition was created, is stored now and where I am currently working on the Addicts and Those Who Love Them paintings.  There is so much creativity, thinking, doing, listening to reggae, and letting the muse flow in the studio.  People come to talk about life, death, love in there.  And of course, I am in the middle of painting things that are interesting to watch as they take shape.  I always show paintings when they are done, and never when they are at the painting by numbers or the kindergarten let me do a masterpiece stage.  My pride has up until now been too tender for anyone to see quite how awful the first few attempts at doing a new painting are.  I have not wanted you to know I work very hard at getting it right, getting it wrong so often that I sometimes wonder if I should get a real job.  Sometimes, I have finally painted a likeness that is terribly good, and I am pleased.  When I come back to it, expecting to twiddle a few flicks of paint and finish it with a fanfare, I notice that the eyes are too far apart and that the whole structure of the face has been thrown out of kilter.  I have that little discussion with myself that says, well, no one will notice, I can get away with it - but I know that I will re do the whole face, from scratch.  I will just have to do it.  It is always much better when it is done, but oh, for that short while, I think, no one will notice.  Don't make me do it all again when it is so nearly finished.

This is the kind of stuff that I will show you.  I will let you all see the wonky drawings, the out of place ears,  the arms that are far to big for the body, the way the painting looks great except that it doesn't look like the person I am painting. I will have to admit that it needs re doing, I won't be able to get away with leaving it. It will be such a new venture, this YouTube channel.  I have already done the first video and will get it ready for Tuesday for when the newsletter goes out too.  In this first video, I had no idea what I would say, and surprised myself by talking about how my USP (unique selling point) is that I have no training whatsoever for any of the work that I do.  I work best on the job, and I say that I do not like to be restricted by rules.  Lord!  This first video seems to be a confessional.  It is true though, I do not even have any art qualifications.  (And I do not like rules very much).  I did not go to art school, I went to University instead and did a degree in Art History.  I felt that what creativity I had would be lost if I went to an art school, it was best to let it be and not dissipate it.  I felt it was both very fragile and as old as time itself.  I wanted to let it grow with me, and now, look.  I am a grandma in a studio in Bognor Regis with my very own YouTube channel.  Move over Russell Brand.

Because my life is so much more than painting, I aim to include the under the radar work I do too.  I will talk about encounters with people who face the ending their lives, people who are living with illness and how it fits into the world in which we live.  There are many stories about these meetings, these times spent passing through someone's life, and of the things we all give and receive in each encounter.  It is linked to the artwork that I do, and so there will be a place for it in the studio.  Even if it wasn't, I would still speak about it, it is so interesting.  And I would like to show the people who visit the studio, and hear them speak.  People from Arun Exact, perhaps, the peer led relapse prevention project run by Ian J Doctor, coming to talk about being in the Addicts And Those Who Love Them Exhibition.  Chats with friends Gill and Marie with whom I run sessions for anyone dealing with loss, loss of any kind, including grief, and perhaps because creativity happens all the time everywhere, I will show the beautiful garden and the work Chris, who looks after the it, does in there, the furniture painting and creating that my lodger Mark is doing in his workshop in his space in the garden, and the piano music that my son likes to play when the mood takes him.

And now, I am going to post the video of my mother's dying.  It is very beautiful, loving and tasteful.  It shows her after she dies, so you can chose if you want to watch. It is kind, and mum has a peaceful and holy death.  It is this channel that will post updates from my studio and creative world.  The first one is up now, so please do watch it.  And subscribe.  The video is here https://youtu.be/O3_lvbd7juc

My newsletter comes out every two weeks, with updates on my creative work and listening and support encounters.  To subscribe, please go to
https://mailchi.mp/antoniarolls.co.uk/signup-for-news-of-events-and-sessions

Please be aware that this loving video shows my mother after she is dead.  Click on the link not the photo. 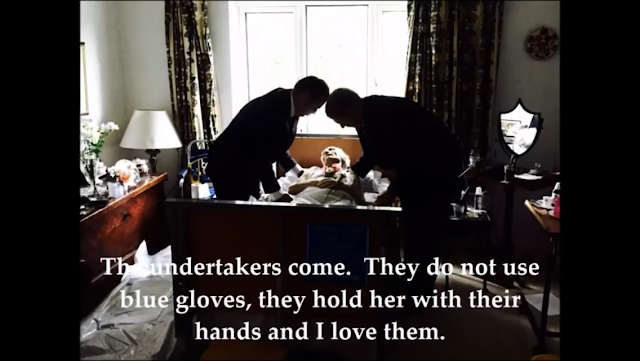 Posted by Antonia Rolls Artist and Soul Midwife at 06:29