There are no Super Grandmas.


George in an Emperor.  He is three now and four on Sunday.  Tomorrow, Saturday, is his fourth birthday party and it is a Super Hero party.

George is my oldest grandson, and a child for whom life is a constant source of excitement and happiness.  He is at the moment a mixture of many super heroes and changes often during the day into his spider man outfit, or his batman costume, or green trousers and jumper as the Hulk.  Yesterday he had a PJ Masks lollipop, as was his right, while his brother had a Peppa Pig one, being not quite as super as George yet.

George's younger brother is called Arthur, a very serious little fellow.  Arthur has Batman pyjamas and understands there is a huge responsibility when he wears them during the day.  Arf, as we call him, is two.  He is with George in the super hero thing, but he does not completely understand it so George needs to guide him and tell him who he is and what his super powers are.  Arf is fine with this, he just wants a quiet life on his own terms, and he knows George is right about all these things.  Anyhow, his Batman pyjamas give him plenty of kudos as George only has Spider Man ones.

Both George and Arf have a younger sister aged seven months called Liliana.  Liliana is used to being played with by her two super hero brothers, and has no problem with being sat on, loved to within an inch of her life, sung to and given toys to play with until we can only see the top of her head above the pile.  But the thing about Lilz is that she has got a super hero girl costume.  Already.  Tomorrow Lilz will be Wonder Woman.

The fourth birthday super hero party will be a grand affair in a village hall.  All the local children and their siblings will be there plus parents and in my case, a grandma.  It is a super hero party so there will be many super powers in the same room, and enough excitement to end in super fisticuffs.  So George's Uncle Dida, six foot seven and super indestructible, is supervising as a superhero himself in order to keep an eye on things.

My jobs tomorrow are mostly about food.  I am going to prepare teeny tiny sandwiches for the four year old Bat and Spider people. And the Wonder and PJ Masks people.  Teeny tiny jam sandwiches in one pile, teeny tiny cream cheese sandwiches on another, and teeny tiny ham sandwiches on a third.  I will be providing pizzas in bite size pieces and fingers of cucumber so that the mummies and daddies will see that it is a bit healthy too.  I will arrive early at George's house tomorrow morning with Super Dida in my car, all the food ready prepared, and help the children on with their costumes.  The party is a morning one, starting at eleven, so everything has to be ship shape by ten thirty.

George's parents, my daughter Lexi and her husband Mike, have been on the case for a good week now.  It coincides with Christmas, and far from George having a substandard birthday because of Christmas, or a substandard Christmas because of his birthday, George's little cup runneth over and he has no break in the celebrations in his little mind.  It is one long fabulous party and he is in the middle of it.  Arf is more of an observer, he is quite an individualist but he does know that if he had his Batman pyjamas on, that things change, and he is happy to be whatever George says he is.  Lilz of course hasn't a clue, but George does not get that yet, her Wonder Woman outfit means she is one of the gang.

Yesterday, George had a word with me.  It turns out that there are no Super Grandmas and no Wonder Grannies that he knows of, and this is really important.  I had told him that I would come in my own super hero costume, thinking that it would add to the fun of the day, and that he would be very impressed.  I was going to find a blanket and use it as a cape.  He'll love that, I thought.  I will be top Grandma and I will show them my super powers.  But it turns out that no, this is a problem.  George is worried that I am out of my depth, my character does not exist, and somehow in his three year old soon to be four year old mind this is a worrisome thing.  Will I just come as Grandma, he asked me?

Of course I will. I said to him.  I will just come as your Grandma and we will have a lovely time together.  So I have put away my blanket and will be a proper Grandma tomorrow, and let him and his little friends be the real super heroes.  And as if to show me how relieved he was, George narrowed his eyes and fixed me with a steely gaze.  He is showing you his Lazer Eyes, said Lexi.  Apparently she and Mike had noticed him squinting and scowling in the back of the car recently and had stopped the car thinking that he was feeling sick.  No, he said, these are my Lazer Eyes.

So tomorrow will be a festival for tiny saviours of the world, their siblings, parents and one normal grandma.  Lexi has made a birthday sponge cake with George helping (you can't believe how helpful I am, he says.  No, we say, we simply can't believe it.  The subtext is George, we cannot even manage without you) - and now she has covered it with red icing and a yellow lightening flash across the top.  The party bags have little masks, a pack of raisins, a bit of cake, a balloon and a sticker.  There will be a bouncy castle for the superheroes, and plenty of tea and coffee for the grown ups.

George, our little Emperor George, is centre of the universe tonight.  He is moving on from being three, into the next stage of his little life, which is being four.  Arf will be well left behind, still being two until the Summer and little Wonder Lilz, well, she does not really count because in her brother's mind, because she is only nought.  She is not even a number yet.

It is late in my house now, and the sandwiches, pizzas and all other foods are done, covered and in the car. Super Dida and I (Super Grandma) will leave here early tomorrow morning, and give ourselves over to the excitement of seeing our little Emperor George become four in style.  Time for tired old super grandma to go to bed, and gather her strength for the onslaught of teeny super people at eleven tomorrow morning.

Grandma, how old are you?
George, I am quite old now.  What age do you think I am?
Nine.
Nine?  Is that the biggest number you can think of?
You're so old Grandma, that you are nine.
Wow. 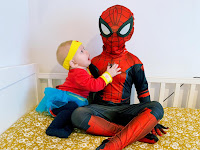 Every two weeks, I write a newsletter with details of the paintings, the exhibitions and the grief and end of life support work that I do.  It is both interesting and entertaining, like me.
To subscribe to the newsletter, please go to my website, a link is below.  And, if you don't like it, you can unsubscribe, and I will never know.


Thank you and I wish you all the best and most peaceful over this Christmas time.

Posted by Antonia Rolls Artist and Soul Midwife at 11:51